In my last article, I presented some of Brussels’ hotspots that you must see. But if you get to spend several days in Brussels, it’s worthwhile to have a closer look at some of the districts the city has to offer.

Just outside the city centre is the landmark of the 1958 Brussels World Fair, the Atomium. A real tourist attraction and a popular place for selfies, which proves to your followers that you really are in Brussels. But what is it about this building? This symbolises the billion-fold magnification of an iron crystal, which in turn is related to the atomic age and is intended to draw attention to the peaceful use of nuclear energy. And it succeeds very well, not least because of its size of 102 metres and the effect that this has. By the way, originally the building was supposed to be about a quarter larger. However, this could not be executed in the end due to flight safety that had to be guaranteed. The Atomium is not only beautiful to look at from the outside, as the balls and connecting tubes have an inner life which is also worth seeing. There are escalators in the tubes and a lift in the middle tube that takes visitors to the top sphere in seconds. From there you can enjoy a coffee and a view of the whole city. How far you can see of the roofs of Brussels naturally always depends on the weather. That’s why it’s advisable to take a look at this attraction on a clear day – although the fog of Belgium of course has its charms too, no doubt about it. 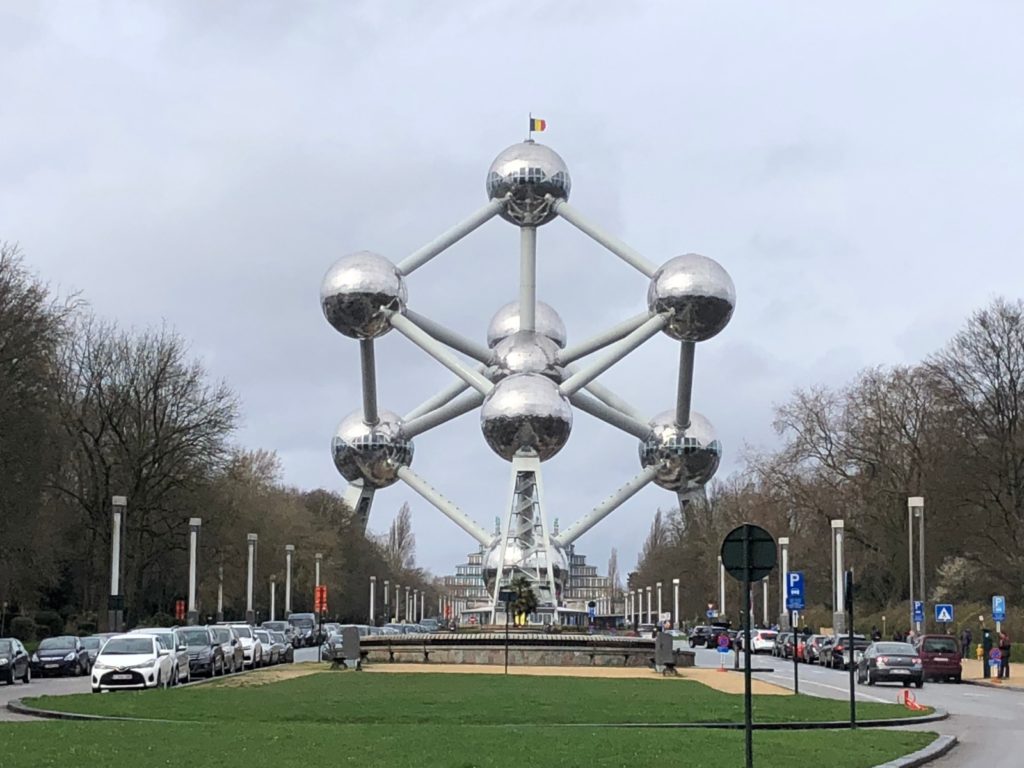 And while we are on the subject of beautiful views, you can also enjoy them at Brussels’ Palace of Justice, the country’s most important court building. It was built in the 19th century and was influenced by various different styles. Thus, on this building, which is located on a hill in the south of the city, you can bear witness to ancient Egyptian, Babylonian and classical-antique styles. These have made the Palace of Justice a monument that shapes the cityscape. A stone’s throw away from the Palais de Justice, there is a Ferris wheel, which at its highest point reaches about half the height of the Atomium and offers an equally magnificent view over the city.

The architectural styles found in the Palace of Justice are also reflected in the various buildings in the city. From the outside, Brussels is therefore an interesting example of the coexistence of different architectural styles and traditions, from the high Middle Ages to the modern age.

Furthermore, not far from the city centre is the Jubelpark with the Arc de Triomphe. The triumphal arch is intended to illustrate the magnificent history of Brussels and serve as an entrance gate for visitors to the park. However, there are many entrances to the park, as it is used very frequently for sports and leisure activities. 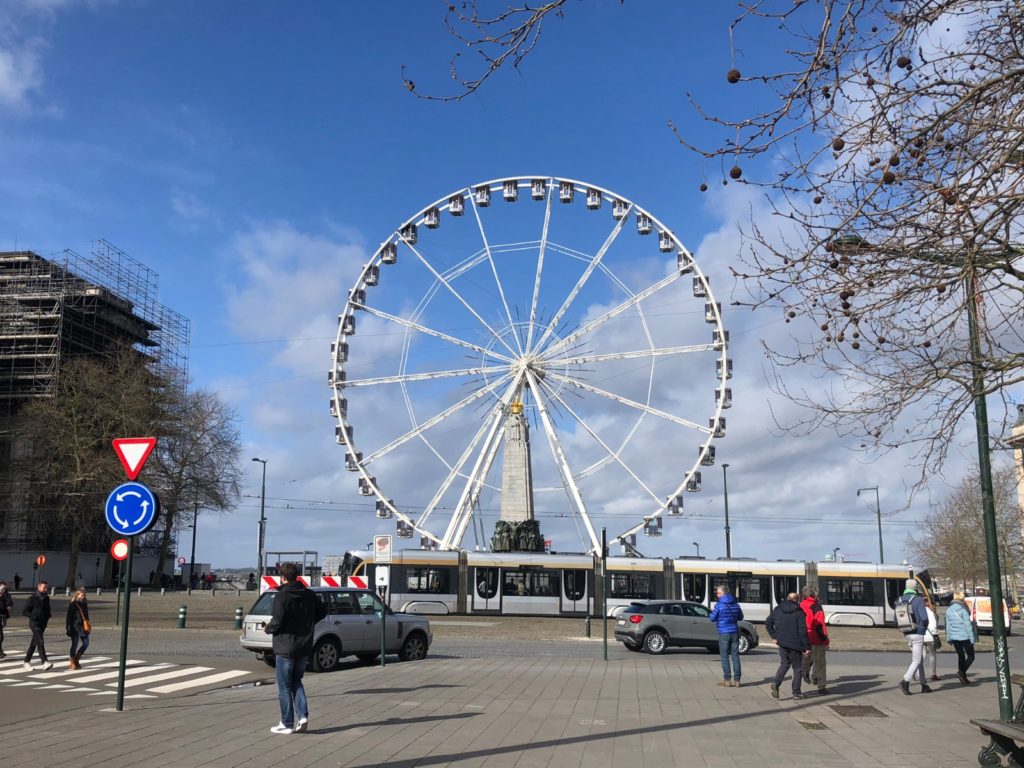 Those who wish to further their education of the city after a walk through its nature have the possibility to do so in three museums, which are adjacent to the Arc de Triomphe. There is the Museum of Art History for art and history enthusiasts and the Autoworld Museum for classic car fans. The Royal Museum of the Armed Forces and Military History presents a military history spanning 12 centuries – from medieval armour to the F-16 jet fighter. The 130 aircrafts in the aviation hall are particularly worth seeing.

One art form that has achieved a broad impact thanks to its original ideas and should therefore not go unmentioned is comics. Very little is known to most people that the three most successful comic series originated in Belgium; the detective comics following the life of global adventurer “Tintin” and his little dog, the hugely popular series “The Smurfs”, and finally the western hero “Lucky Luke”. If you are in the Belgian capital, however, it will become apparent after a while that these figures do in fact come from Belgium, as you will find these comic heroes on many buildings. They represent an embellishment of the cityscape as well as an appreciation of this art. 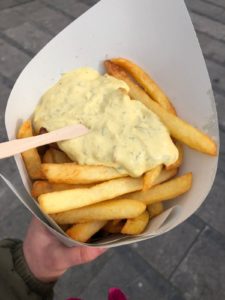 Now we come to culinary specialities, which I already mentioned in my first report “On the move in the heart of the EU”. What you should definitely try in Brussels is fries, better known as French fries. This dish, which is usually eaten in Belgium not as a side dish but as a main course, originally comes from Belgium and is different from other variations of the dish such as German French fries. Crispy on the outside, tender on the inside, double-fried and offered with a variety of possible sauces – this is the true Belgian specialty. You can get this in many places in Brussels, but the best known are the Frit Flagey and Maison Antoine, where many famous figures, such as German Chancellor Angela Merkel, have dined. According to this, the queues are also a little longer, but in the meantime, you can start thinking about which of the roughly 30 sauces you would like to have with your chips.

Another special feature here in Belgium is that many bars and pubs situated around these French fries stands have a sign reading “Frites acceptées”. This means that you can take the fries with you to the pub if you want to enjoy them alongside, for example, an excellent Belgian beer. Which brings us to the next culinary specialty this country has to offer; beer. Belgium is at the top of the league in beer consumption per capita. Only Bavaria can keep up in this regard. Belgium is not subject to any purity law and has an almost surpassing variety of beer types and brands. As flexible as the Belgian beer drinker is, the right beer is chosen depending on the situation, mood, weather, or food. A “real” Belgian would concentrate mainly on top-fermented beers from wheat beer to Alt and on Lambic in its variations from Kriek to Gueuze. 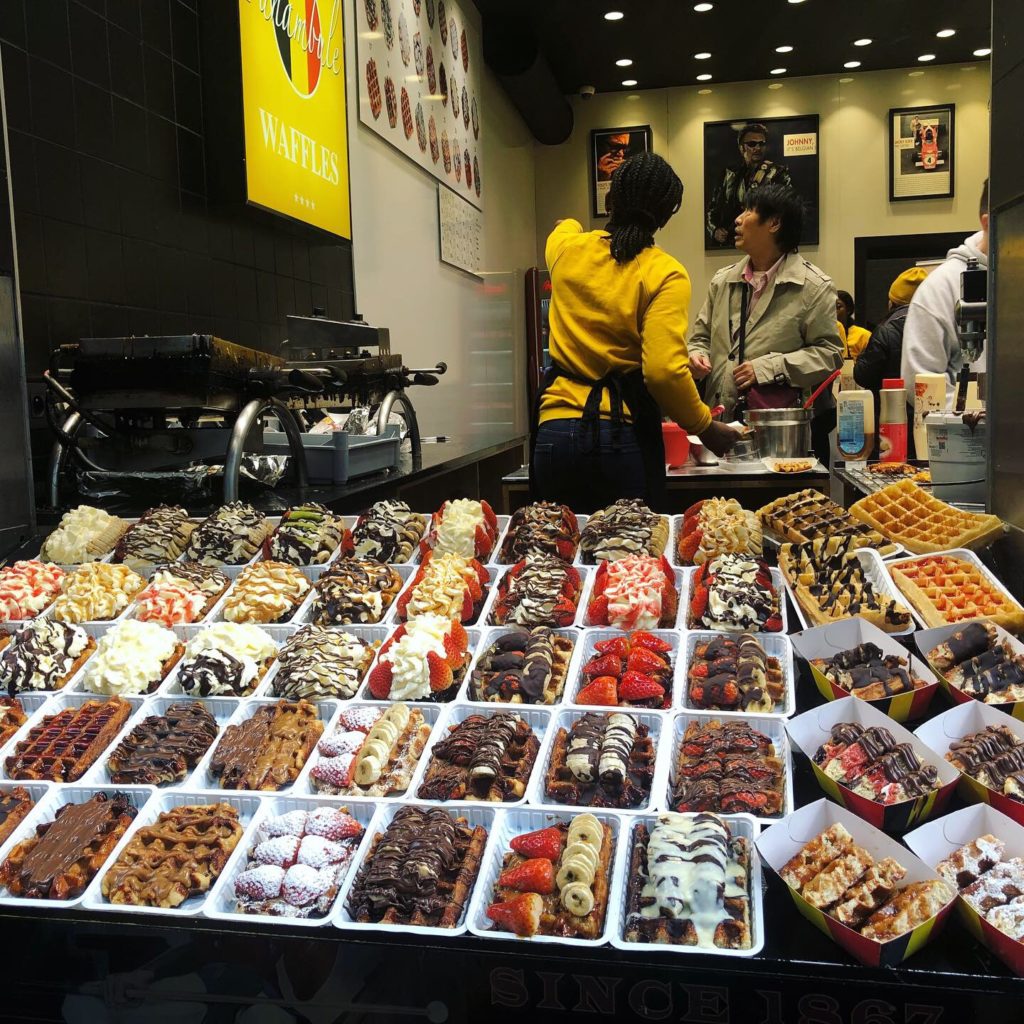 But the Belgians also take the lead at the front of the ‘dessert race’. Around the Grand Place, as well as in very many alleys of the city centre, a sweet smell can be found, which denotes that there are many delicacies in this area. You can find here anything from a wide variety of chocolate, pralines, and famous Belgian waffles. These are thicker than those known in Germany and have a patterned design. Here too, there are no limits to the imagination when it comes to toppings – almost all sauces, fruits, and decorations are conceivable ideas.

Hopefully by now you have gained a good insight into Brussels’ specialities. Yes, most of them are a bit fatty, but you don’t have to try all of the possible variations and you don’t need to eat them every day! In addition, you can balance the calories gained from the delicacies with leisurely strolls in the beautiful parks, which will be discussed in more detail in my next article on Brussels.
Additionally, there are also salty dishes that contain less fat, such as tartes, which by the way are also available in many different forms. Yes, you read correctly: in Belgium it is customary to buy not just one piece of a tart but the whole thing!
What these Belgian dishes have in common is that they are all prepared with great love and care, which should be tasted for yourself!