Milano Bovisa: The Silicon Valley Made in Italy

Home » Europe » Milano Bovisa: The Silicon Valley Made in Italy

Located in the north-western outskirts of Milan, for much of the twentieth century the Bovisa quartier was one of the most productive industrial poles of the city and an important generator of employment for many generations. After a long period of dereliction, in recent years Polytechnic University of Milan redeveloped the quarter. The Bovisa quarter, in fact, is back to being an important center for creative and design industries at international level. An area dedicated to inventiveness and creation, a place where young talents study and work, becoming the reflection of a young city constantly evolving.

In the early 1900s, the Bovisa quartier was isolated from the downtown, divided in two sides by the rail station and made of a great number of commercial establishments. It is in this place that important companies were founded. Among these, it is important to mention factories like “Candiani” (for the production of sulphuric acid) and the early Italian film studios with “Ambrosio Film Torino”, “Armenia Film” and “Milano Films”. Although it was one of the most important industrial poles of that time, a period of gradual dereliction started between the 50s and the 70s for the Bovisa quarter and in 1994 even the last factory – a power station – closed. 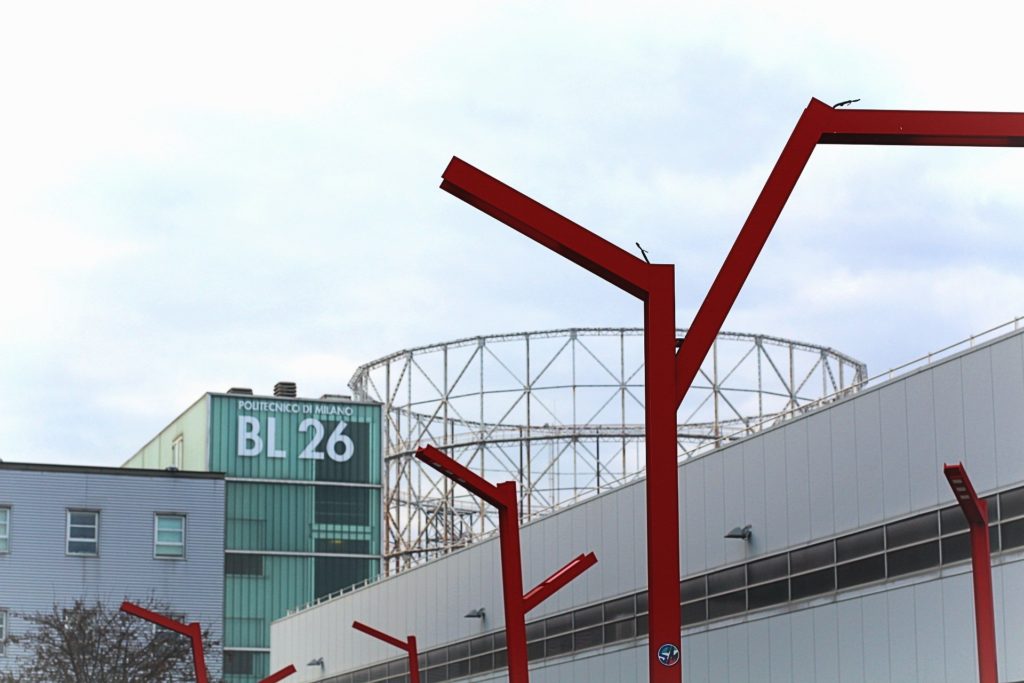 In the late 1900s, in order to redevelop a quarter entirely fallen into disuse, the PoliMi Bovisa Campus was founded. In particular, the region in collaboration with the municipality and the Polytechnic University of Milan decided to transfer in the area the headquarters of the newborn Design School and the Industrial and Information Engineering School.
Since then, the quarter known as “New Bovisa” has known a period of great expansion with the entirely redefinition of the area: the industrial buildings are completely reorganized, becoming not only locations for Polytechnic lessons and laboratories, but also for hubs, fablab, co-working and workshops. In these buildings design meets technology, architecture, fashion, agrifood, medtech, circular economy, inclusivity and social; and people devote themselves to research, experimentation and innovation. Besides the buildings dedicated to PoliMi, there are other edifices used as cultural circles, like “La Scighiera”, or as recreational spaces, like the dancehall “Spirit de Milan”. In these places, people dance, chat, listen to the music, meet and drink something. The aim is to crowd the quartier even at night, after completing the day’s work and study.

Bovisa represents the quartier of a city that has grown significantly over the last few years. In particular, Milan grew thanks to the greatest interest for a young population more and more attracted by a dynamic environment and, at the same time, by job opportunities. The Major of Milan, Beppe Sala, in an interview for the column Il Maschile of the daily Il Sole 24 Ore said that Milan was very different ten years ago. He claimed that nowadays it is possible to hear people speaking different languages, while walking through the streets. Moreover, Milan is considered one of the 30 most charming cities in the world (…). According to the data he reported, the 30% of foreign investments in Italy are in Milan. This is due to the presence of different components that are very important in the city, like university, fashion, factory, voluntary work and curia. In Bovisa all these components together seem to operate very well.

Among the most remarkable projects of this place, it is important to mention the fablab. In particular, it deals with health care, an area of great planning ability where design meets technology in order to create and renovate everyday objects for people with disabilities. Some examples are given by modular and customizable crutches, 3D printed and equipped with software walking sticks, walking frames for elderly men to measure the gait and the risk of potential fall, and the “Palpatine” brand created for the auto-palpation and for the prevention of breast cancer.

Moreover, with the collaboration of the “Fight the Stroke” Association, a space for the post-stroke rehabilitation was created in this area. In particular, not only new gears are experimented, but also different activities with specialists and volunteers take place. Another important example of innovation is given by Edison Bovisa laboratories, where the electrical push scooters were created, which nowadays are everywhere in Milan.
Many companies are interested in investing in Bovisa. Many projects are in progress and many talented students decide to stop here. After one century, this quartier still maintains its nature of Milanese industrial and occupational engine, where people invent, create, work and grow.

Europe is… united by the borders that divide it Europe is a place where you can meet something different, take part in otherness and preserve cultural uniqueness. Europe is union and community.