Antoine and Julie, two 20 year old French college students, spent their “workers’ internship” in an Indian orphanage where they discovered girls striving to get an education for a better future. They tried to encourage and entertain them during the summer.

There are few young French people who travel the world before going to college. Indeed, the practice of the “white year” (gap year) after secondary education is unusual in France, but thanks to scouting movements, Erasmus and overseas internships, some of them, like Julie and Antoine, can travel and discover the world.

We met them when they came back from their stay at “Ingrid paradise” in Siruguppa in the State of Karnataka, close to Hyderabad, South-West India. We asked them a few questions. 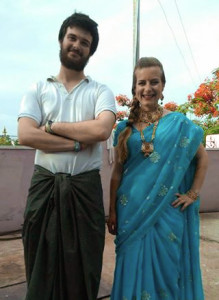 Antoine and Julie in traditional clothes

Why did both of you go to a girls’ orphanage?

We are friends and both of us had the same longing to travel and to help our fellow man. Last year, thanks to “Scouts et Guides de France”, our Scout organization, we separately took part in a self-financed humanitarian mission for a few weeks, during the summer holidays. This past summer, because of our mandatory workers’ internship required as part of our studies in Julie’s Business School and in Antoine’s Computer Science School, we decided to devise a similar project.

Since we were happy with any destination, our search focused on a place where we could work with children in difficult living conditions. We looked for large scale humanitarian organizations: from Mongolia to the Philippines, and also in India! Nepal was our original destination but unfortunately the earthquake destroyed the building of the association where we were meant to stay and we were not welcome there anymore. In the end, during an Indian cultural evening held in our home town, we heard of SIWOL which supports the Indian orphanage Ingrid Neeva Jeevana or “Ingrid Paradise”. Ingrid is the name of the German adoptive mother of Prema Kundargi, the owner of the orphanage, who was an orphan herself. 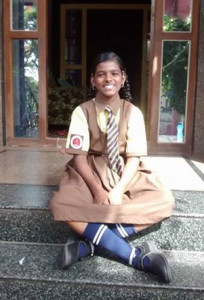 Tell us more about SIWOL and this orphanage.

SIWOL – Support Indian Women’s Life – is a French organization founded by a French Student from “Sciences Po” (Institute of Political Sciences) who spent a year long sojourn in India. Today SIWOL is run by five members. It collects funds and sends volunteers to the orphanage. It tries to inform French people about the plight of women in India. Thus, cultural evenings and presentations are regularly scheduled. As for the orphanage, it takes in orphans from the families of “traditional” prostitutes: the “devadasis” whose mother might be deceased or afflicted with Aids, and takes care of their education. Its ambition is to provide them with a shelter, medical care and sufficient good quality food to allow them to grow and to blossom.
All the orphans attend a private school where classes are in English (“English medium school”) to ensure they get a good education which could allow them to attend college or a professional school.

Who are the devadasis?

The “devadâsî“ – literally the servants of the divinity – are women dedicated to the temple since they were born. They are considered to be the divinity’s spouse, named “forever favorable women” (their husband, their god cannot die during their lifetime) and they have sexual freedom, which other women married to a “mortal” do not have. When they reach puberty, their virginity is sold to a man who could become their regular client. This system leads to prostitution because of religious practices; the young girls might be sold to brothels in the largest cities. This tradition was officially banned in the 1980s but it still exists due to poverty, traditions, for instance the heavy burden of the dowry, and religious beliefs. A young girl which doesn’t dedicate herself to the temple takes the risk of displeasing the divinity and bringing a curse upon her family. 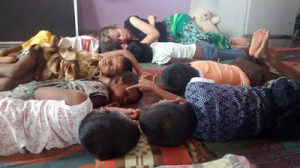 Taking part in their daily life… a nap!

In concrete terms, what did you do in the orphanage?

We stayed six weeks. At first we got acquainted with the orphanage and got used to the rhythm of their daily life so as to define and devise suitable activities which could entertain 35 residents in a 2 to 20 year age group and help them in their studies. We also wanted to get them to discover new geographic and cultural horizons to encourage their interest in new subjects and new activities they had never or hardly ever heard of. Throughout this process we took into account their personal situations and the relative isolation of the village (52,000 inhabitants in total) which was far away from the big Indian cities. 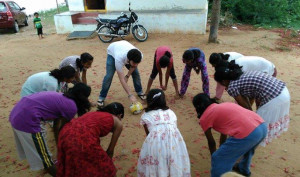 We strove to fit in with the orphanage, taking part as often as possible in daily activities from breakfast to bedtime. Every day, we helped them with their homework and tried to show them different ways to do their lessons. Then, since both of us had an experience in the field of sociocultural activities thanks to the Scouts and our attendance at a youth worker training session, we frequently organized large open air games and theme evenings. We put on handicraft workshops and taught them how to make origamis, and cooking classes with simple pastry recipes. We organized two outings: one in the fields in the countryside close to the village and another one to the village fair. We even personally paid for the outing after some horse-trading with the owner!

One of our tasks was also the development of a number of little leaflets, each one presenting a globally famous monument so they could discover the rest of the world. We had found out that their studies were centred only on India and its geographical, economic and cultural resources. We had time for this task as most of the girls were in school part of the day, so we had some free time left over to prepare our articles. 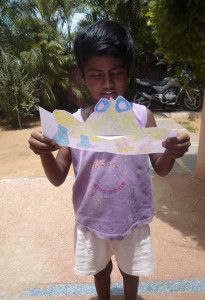 What problems did you encounter?

First of all, the weather was very warm and we were tired most of the time. The area is rather dry and the monsoon did not bring much rain this year. We had to get used to the very spicy food which made us sweat very strongly at first. It got better after a while. We ate a lot of plain rice and bananas, because the orphanage could not afford meat and vegetables, although sometimes generous neighbours donated some. Varied food was reserved for celebrations. As for how we communicated, the girls understood English rather well since it was the language they used in their studies, but they did not practice it very often and they spoke with each other in their native language, Kannada. However we met newcomers who had to learn English and Kannada because their native language was Telougou, the language of the neighboring state. When we held our activities, like games or cooking classes, we used to explain the rules or the recipes to everyone and then we had to ask the eldest girls to translate, to make sure that everyone understood. Even if our message had not been clearly understood, at least we were sure that everyone got the same message. 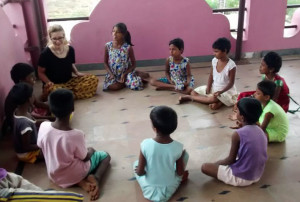 Therefore sometimes our games became their games with their own rules! We had to adapt and make sure they had fun. Later on, we found out that it would have been better to give examples rather than long explanations. We were sorry though that the adults of the orphanage were not very interested in our entertaining activities. Obviously over there studies are much more valued than play. Sometimes we were carelessly interrupted because it was time to study, to have dinner, to pray or to tidy up the place.

How did you get organized?

Above all, we took into account all the aspects of the project: health, security, transport, financing, culture and knowledge. To start with, we updated our vaccinations at the Air France medical centre and got information about the health hazards we could encounter.
Then, we fixed the dates according to our academic calendar and decided to go to India from mid-June to mid-August. We bought our tickets in March to avoid the higher prices.
We also talked at length with the people in charge of SIWOL since they could tell us more about the orphanage, and we thought up some activities which could be of interest to the orphans.

And what about financing of the project?

For the financing we had already learnt how to deal with it because of our previous experience as scouts. We decided to choose personal financing: Julie worked for two months in a bank during the summer of 2014 and Antoine gave lessons in maths in the city’s social and cultural centre, and gave private evening lessons to high school students twice a week. We also asked for a grant from the local council in Antoine’s town, which we got, and resorted to the crowdfunding platform Ulule, where friends and family members gave us money in exchange for the promise of bringing them back presents from India.

And then, after the trip…?

We shared our adventure with as many people as possible to make sure there were two or more people taking over next summer. SIWOL is not very well known in the scouts for instance and if we talked enough about it, it was quite possible that a scout unit would go there in 2016.

What is your fondest memory?

The smiles and the kindness of the girls from the orphanage. After each activity, they would come and thank us to have taken care of them and to have shown them a good time.

Studies / works: English, involvement in organizations aiming at the circulation of books and the practice of reading